Edit: This post talked about the International Airport in N'Djamena before it was renovated. The redesigned airport, baggage claim area and lobby are clean and function well.

We arrived back in N'Djamena, Chad on October 21st. Thank you for praying as we traveled - we saw His providence in several different phases of the journey.

Departing Kitchener for Toronto the normally reliable minivan began to play a symphony of bells and flashing lights – no doubt complaining of the heavy load. Mer's dad's advice was comical, "don't worry about the warning lights, they mean nothing and go on and off as they please". This one was the coolant temp - which actually was telling the truth but a short stop to top up the levels and we were on our way - now with only false warnings showing. Initially I had visions of being towed by CAA into the departures level of Pearson Airport. Nice to avoid that sort of start to the trip. Merilee holding the bags at bay before leaving London.

Then at the check-in counter the Air France lady was understanding and lenient with our 13 piece armada of baggage and miscellaneous items including a stroller, a booster seat and an infant car seat. She noted that some of the bags were over the 23 kg limit but chose to take the average of everything in the end. The guy checking that our hand-luggage was up to latest specifications was so bewildered by the 4 loaded baggage carts that we didn't actually have to undergo that particular bit of scrutiny. I suspect one or two of them might not have actually fit in that tiny metal frame they use as a benchmark. 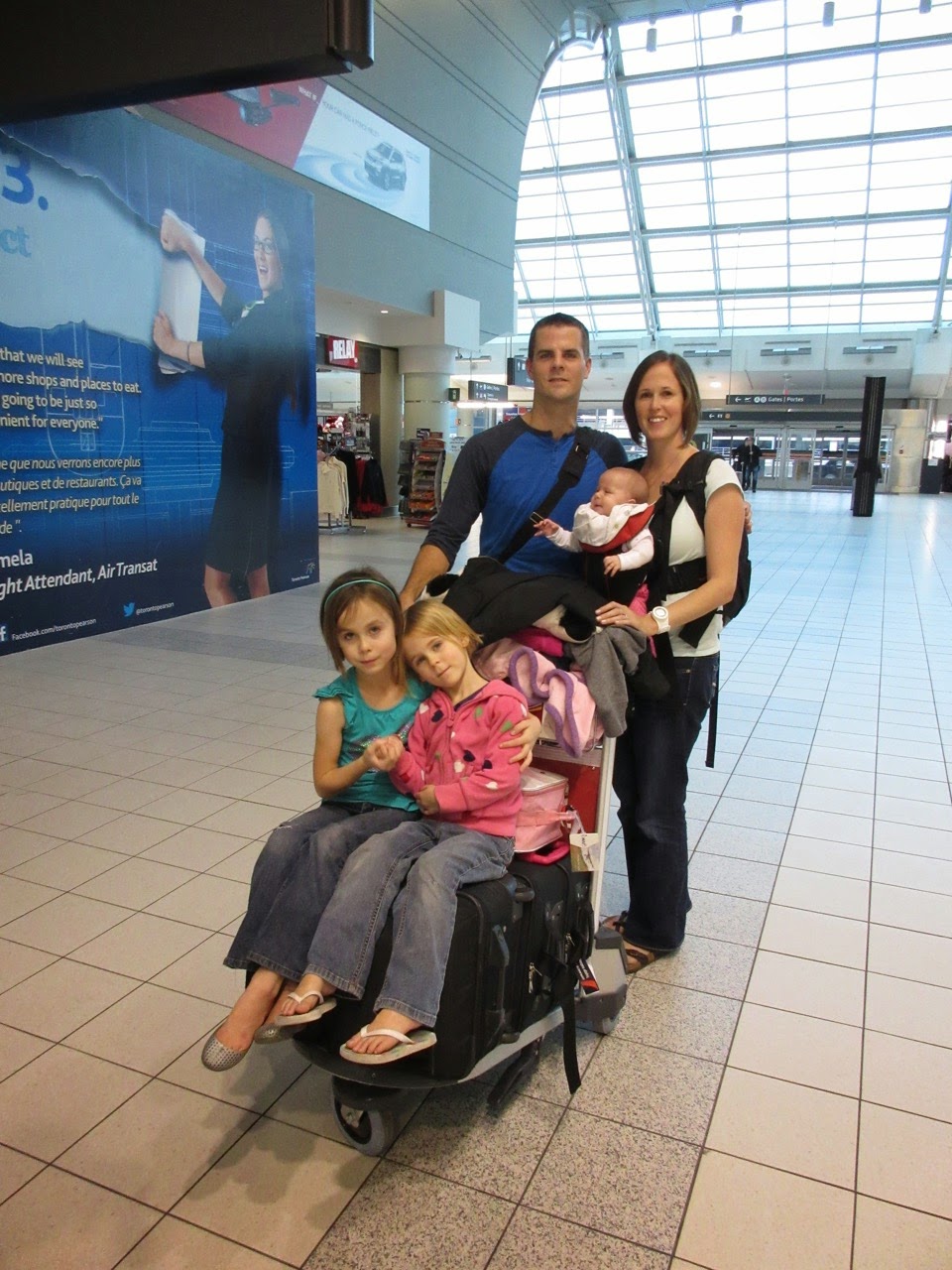 Baggage checked and ready to go...believe it or not, that's all hand luggage.

It was on to security next and into the frenzied circus of lineups, x-rays, plastic bins, no shoes, no belts, and not many smiles. We readied ourselves for a long circuitous line up but a yelling and waving official at the front saw our kids and ushered us down the VIP line. A piece of advice for the security line...don't pack wrapped Christmas gifts in your hand-luggage. A set of drill bits won't make it past the checkpoint but it's a good way to get an x-ray scan of what you're getting for Christmas. So that resulted in me abandoning Merilee and the girls on the air-side of security and hoofing it back through the circus and past a trio of still-waving grandparents to check bag number 14 at the counter. Amazingly, I didn't have to pay for this extra bag and I was back through in a flash to meet up with Mer and the kids. 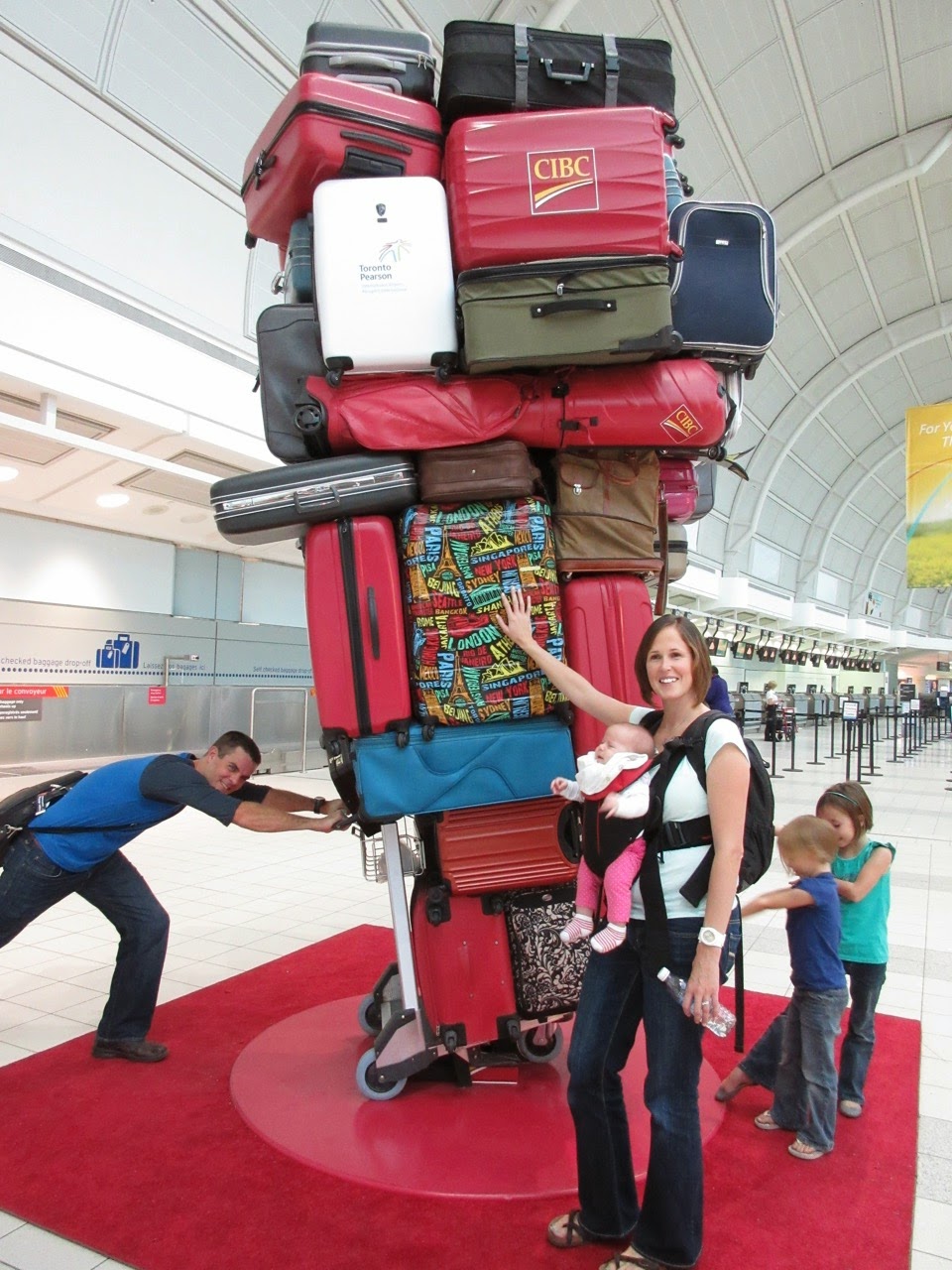 As for the rest of the trip, it seems that having kids in tow is as useful as being one of those Platinum Premiere Club members you always see boarding the plane ahead of you. We were first to board both aircraft, allowing us unrestricted access to those coveted overhead storage compartments which are so much in demand in this time of airlines minimizing under-seat space and charging for checked bags. Kaitlyn pulled her weight (almost literally), deftly handling her full-size rolling carry on, beaten only by the stairs off the plane in N'Djamena.

And that brings us to the airport in N'Djamena. I actually woke up early a few days before the trip going over in my mind all the different ways the arrival at Hassan Djamous International Airport could go. Being anything but our first time through that airport makes it worse, because you've had a taste of the chaos. My helpful sister sent me an article a week before the flight of the top ten worst airports in the world. You can guess where this is going...yes N'Djamena definitely made the list. Arriving at night was a welcome change from the norm for us. We stepped off the plane into an agreeable 28°C at 9:00 pm. The smells of Chad met us, both good and bad, as did a line of military police. This would be alarming anywhere else, here it's just what happens every time a plane comes in. I guess they really never know if an Air France passenger is going to disembark and make a break for the fence. Regardless, it was a reminder that we were back in Chad!

They screened us for Ebola at the door to the terminal. Everyone got a zap on the head for a temp check and then a mandatory drop of hand sanitizer in the palm from masked medical personnel. It was more than I was expecting, especially as we were arriving from Paris, but we're happy to see that they were taking it seriously. Our visas, which caused such a last minute rush, were accepted without hesitation or question and with only the baggage claim remaining, things were looking good. However, only a passenger arriving for the first time would make the mistake of thinking the worst part was out of the way.

It's not easy to adequately describe with words the chaos of the baggage claim area at the N'Djamena airport. If you were to cross the airport security area of Toronto Pearson with Pike's fish market in Seattle (switch the flying fish with flying suitcases) and you'd be starting to get a good idea. Now throw in 15 guys running the x-ray machine, lots of yelling, an assortment of insects strewn across the floor and you're just about there. We were trying to get 13 bags through off the conveyor, through the x-ray and out the door. I hired a few guys who specialize in getting your stuff through - anywhere else they'd be known as porters or baggage handlers but here they have to be negotiators, heavy lifters and acrobats. I struck up a friendly conversation with the police officer in charge of the whole thing who took kindly to me asking about family and life in general. All the while bags were slowly moving through the queue. After exiting the x-ray a couple of our bags were set aside by the 15-strong team of x-ray judges but each time the officer yelled something over to them and the bag would be put back into the line. Before we knew it, we were done and all the bags were out! It was as close to a "these are not the droids you're looking for" moment as I have experienced. Small answers to prayer at every turn. Thank for praying.

The last step was to get out of the building, which meant pushing loaded carts through a New York subway-esque turnstile/meat grinder apparatus. This is where the baggage guys really earned their wage. There was vicious pulling, heaving and slow squeezing and finally we popped out and into the hot heaviness of N'Djamena at night.

A brief side note about the x-ray. Many visitors comment on how strange it is that the bags have to get scanned on the way out of the airport. While this seems a bit late to be detecting anything dangerous, what they are really looking for are things destined for the market. Almost everything for sale in the market comes from outside the country - so the customs awareness in Chad is very high. If you bring too much of the same looking item into the country then your bag will get pulled aside for "further inspection", and when you bring 13 bags through the assumption is that somewhere in there you must be bringing something in to sell.

Arriving home we found our house had been cleaned, beds made and some fruit and bread in the fridge for breakfast. There was even a lasagna in the fridge for dinner the next day – all thanks to some of the other MAF families. Kaitlyn and Lily found Whiskers the cat right away, much to their and his delight. 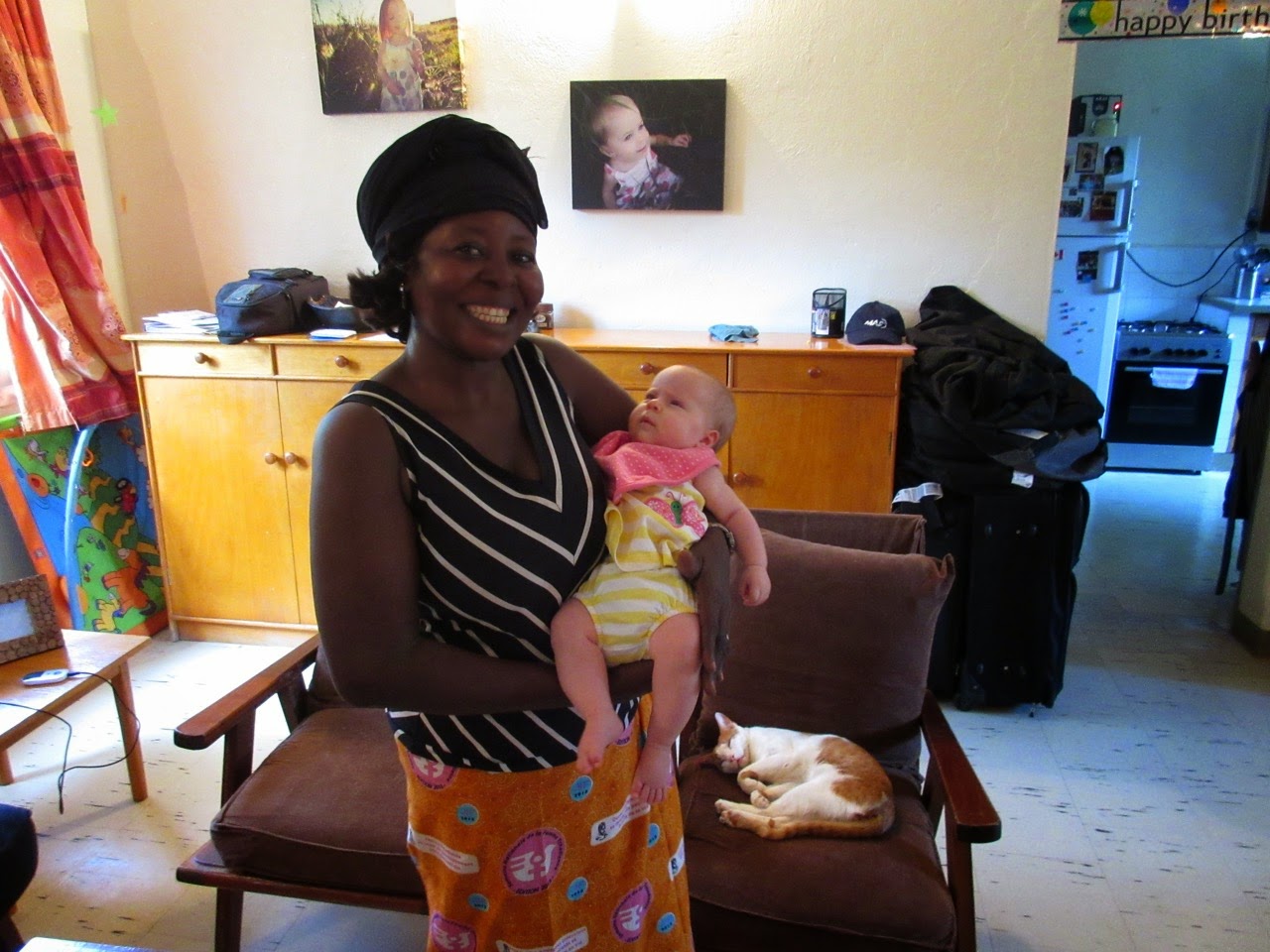 Josephine works with us and was very happy to meet Evie

K and L slept until 9 and 11 the next day. Mer and Evie got plenty of sleep but for some reason I was up at 5:30 sharp. That's my normal wake up time around here anyway so my body was just getting onto schedule from day one I guess.

By now we've unpacked everything, have gotten back into our Chadian routines and have linked up with friends again. We also continue to train the kids to try to keep the door closed - however here we're keeping the warm air out.

Thank you for the part you have in the work here in Chad. Talking with the other two pilots upon my return, they confirmed that there has been and will be just as much a need for the service of MAF as ever. For example, the road out to Am Timan (directly East across the country) was washed out during the rains. We had several flights out that way as a result. I've since been on some blog-worthy trips so there will be more to come.

Posted by Phil and Merilee Henderson at 10:39 AM