Another stone on the pile

As we've been preparing to go with MAF, even as far back as 2005 when we left for Alberta, we have experienced important events and circumstances which displayed God's hand in our lives. Most of these, if we chose to, could have been passed off as coincidence or worse, good fortune. Most of them looked, as they were approaching or occurring, like they would be generally negative episodes and things that we'd rather not go through. It is in the retelling that we've seen God's hand most clearly. And it is in the remembering of them that we can turn and face the hurdles ahead.

One that comes to mind is Merilee not having a job in Three Hills before we left and then the provision of the perfect position working in the athletic department–a job any of her fellow Western KIN grads would have killed for. Another was the news that I'd have to stop flying for 6 months (when I'd just begun) so the doctors could do an extensive check into an abnormality on my ECG. Not my first choice but one that made it possible to get a construction job during the time and being able to save a good chunk of money for flight training later. The story of how God brought us through the whole training at Prairie in good time and debt free is one we often go back to in order to draw strength for challenges in the future.

God told the Israelites to pile stones after being brought through the Jordan river:

In the future, when your children ask you, ‘What do these stones mean?’ tell them that the flow of the Jordan was cut off before the ark of the covenant of the LORD. When it crossed the Jordan, the waters of the Jordan were cut off. These stones are to be a memorial to the people of Israel forever.” Joshua 4:6-7


Over New Years we had an experience which caused some concern. Some of you heard that we hit black ice and spun-out whilst driving to Nic and Julie's place on the 30th. On the 1st we returned by the same route and stopped to snap a few photos of the scene. I've added some "emphasis" on the photos so you can see roughly where things happened. When you look at them just praise God with us.

This is us putting another stone on the pile. 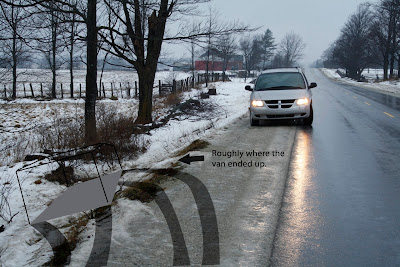 Incase you're wondering, there were no injuries, no damage to the van and the kids didn't even wake up. CAA showed up in half an hour to pull us out and we were on our way, gingerly.

Posted by Phil and Merilee Henderson at 10:36 AM